In Ukraine, the government is preparing its opinion to a “great war” against the powerful Russian neighbor. Editorial writers often talk of a new Cold War between the West and a post-Soviet Russian empire led by Tsar Putin and composed of politically immature people and followers. Cold War? Has the former cold war been really finished? It seems that we are entering into an undeclared war full of uncertainties.

Warmongering of the American establishment has escalated in recent months. Hesitation and procrastination in the Middle East are competing to anti-Chinese statements and a european policy without any strategic direction. 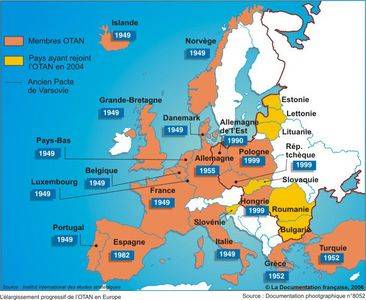 During the Cold War, the position of defense batteries and troops in Europe was designed to deter any invasion of Soviet troops and to establish a front line. But since the collapse of the Eastern bloc, NATO is trying to nibble territorial space in the name of democracy and of the market economy while Russia and its federation (a quarter of the land on Earth) can not bring itself to abandon its empire or its expansionist policy. From the 19th century, long before the bloody Bolshevik adventure, Russia knows the internal conflicts in Chechnya and in the rest of the Caucasus. The harsh doctrine is there : fight any rebellion that could become a snowball into Russian territory and consolidate installing Russians in neighboring, Slavic or not, territories (here Ukraine and Estonia in the Baltics ). This strategy is more or less successful. If the Russian-speaking populations are often unappreciated native (or hated in Estonia where they are at the origin of the relative majority of offenses, crimes and antisocial behavior) in 1992, Abkhazia seceded from Georgia to be closer to Russia. To do this, it is still the old method of traitor and enemy who is summoned. Former Georgian President Shevardnadze (former foreign minister under Gorbachev) denounces American maneuvers (through USAID and the Open Society Foundation of George Soros) in Georgia (non-Slavic origin, but protocaucasian and original land of European man) who hesitated between the two poles of influence. The United States contended his rival Gamsakhurdia before leaving him, letting a country plagued by multiple movements disorganized or less rebellious and often mafia.

Since his arrival at the head of post-empire Russian, Vladimir Putin has always based its policy on a return to the Russian imperial grandeur. To this end, he built his seizure of power on the secret services (with the full panoply of corruption, torture, disappearances), medias and political parties under his will and reactionary conservatism with religious overtones. In his editorial of Le Monde Diplomatique this month, Serge Halimi recalls that Putin uses the mythical figure of Vladimir the first, to justify its legitimacy to revise the Ukrainian border.

So to see this country fall into the hands of NATO is, in the eyes of russians, an historical aggression. Moreover, if the positions of NATO is observed in Europe,  eastward progression is rooted in much more economic than strategic or democratic justification (remember …TAFTA). Result: Turkey tends to get rid of this; the convulsions which agitate the country there are certainly no strangers.

But paradoxically, it is further to the east that Putin’s Russia is seeking to increase its trade. Bridge between Europe and Asia, Russia wins to develop its  Siberia (an Eldorado in power), its trade with China (with whom she has signed energy agreements) and Central Asia in order to make transit pipeline to Southeast Asia. The situation prior to the crisis in Ukraine is therefore retrospectively figure of a precarious balance, but a balance. A balance jeopardized. The escalation of provocations by either side does not know limits. As for European diplomacy, it plays a much more adventurous game during the Cold War when the forces of deterrence and objectives of both sides were clear.

Pride took path over reason. Among both hawks (Democrats and Republicans) of the US diplomacy of the Russian bloc. On each side, the arms manufacturers are pushing for budget increases in the area of defense. Recent speeches of Putin, Obama or Merkel leave no doubt and France followed (hence arms sales to allies of circumstances). In this case, the most entitled to express the situation experts - establishment, medias or in university - have little right to quote; a situation that is worrying in a liberal society and recalls the unfortunate media-political poisoning during the war in former Yugoslavia 20 years ago.

In the general perception, this race towards war amid economic crisis does not fail to recall the tensions that prefigured the Second World War, when the desire for revenge prevailed. But fortunately Putin has no interest in leading all that to the conflict; this, the Ukrainian pro-Russian opponents have understood. Classic imbroglio …: their confidence in the Russian president is far from absolute, but they get naturally supports through a historically porous border despite the independence of Kiev.

At a time when Ashton finally gives way to Federica Mogherini, it is interesting to follow the evolution of the EU’s position in that conflict. Concerns were raised on a supposed “near of Russia” Mogherini (her Communist Youth?), But there is no reason yet to assume a bias on his part. The NATO summit seems to confirm a belligerent position of the organization while Ms. Mogherini claims to consider nothing else that a diplomatic solution to the crisis. Does she succeed finally to impose her personality, in one European voice? Where is Europe? And it is probably this lack of Europe which is why Russia is diverted from its intellectual, cultural and artistic Western Hemisphere for the benefit of its Asian economic hemisphere.